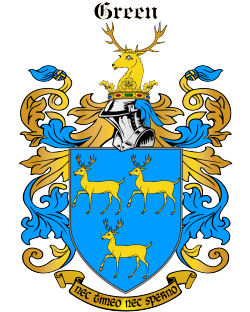 Design your own Grene Family Crest

Recorded as Green and Greene, this is one of the most widespread of English, and occasionally Irish, surnames.

With Germanic and Old English origins, the name derives from the word 'grene' meaning green, and may in some cases have been a topographical nickname for a person who lived near to a village green or a place called Green. The word's alternative meaning, a symbol of youth, spring and the re-growth of nature, may have referred to a young man who took part in ancient May Day fertility celebrations, or referred to that young man's inexperience.

It is also an anglicisation of the German as well as the Ashkenazic Jewish surname Grün which also means green.

Some of the earliest references to the surname appear in the 1181 Kent Pipe Rolls (Geoffrey de Grene); the 1350 Oxfordshire Feet of Fines (Geoffrey atte Grene); and the 1379 Norfolk Poll Tax (Johannes le Grenex).

In 1881 the surname was widespread across England, but appeared in heavy concentrations on that year's census in London, Lancashire, West Yorkshire, Staffordshire, Warwickshire, the south east of England as well as in Lincolnshire and Norfolk.

In 1891 the frequency of the Green spelling on that year's census was 88,772 throughout the whole of England and Wales; and there wre 917 incidences of the Greene variation. The highest concentration of the surname was in London, with 12,683 entries, and in Lancashire with 11,984.

In Scotland in 1891 there were 2,136 entries, and the highest numbers were found in Lanarkshire.

In Ireland in 1890, there were 152 relevant birth registrations (105 for Green, 47 for Greene), mainly ocncentrated in Dublin, and counties Galway, Tipperary and Clare.

In Wales the highest numbers of Green family members were historically most evident in the counties that border England, including Flintshire and Monmouthshire.

Tell us about any famous Grene (or surname variant) you think we should add here. We will get our genealogists to check them out and add them to the list. Thanks!

Join the conversation with the Grene tribe

My great great grandfather was Gerald “Jerry” Green. I think he was born in Ireland around 1820. He came to the United States and settled in Houghton and Keweenaw counties in Michigan maybe around 1837. He and his wife were killed in mid 1860’s or early 1870. He was married and had three children. One was called Rose, she ended up being a teacher. One was called Abram or Abraham (my great grandfather), and there was another boy. Both boys were adopted after their parents deaths. I am thinking Rose may have been older because she was taken in by a family but not adopted. Does anyone have any information to this Green family. I don’t know anything about his parents, etc. or the wife’s name.

My Great Grandfather was Arthur Green. He was a sagar maker I the potteries. He emigrated to the US in the late 1800’s. I think he was from Shropshire

Looking for information on the green name from Portland Indiana...Cletus Green was my Grandfather..

(Part 1 of 3) The Green name is found in the British Isles, but one of its origins according to DNA is from the north-west coast of the Emerald Island. One Green story [dominated by DNA tribal marker R1b-L513, Subgroup A1] can trace their origins to the Finn Valley in Donegal, Ireland from 50 BCE. Perhaps the journey begins with the Clanna Dedad; Deda, son of Sen or Deda Mac Sin. This Green surname origin is from a Northern Ui Neill [R1b-L513] tribe. The Cenél Eoghan and the tribes of Donegal conquered much of Ulster (Derry and Tyrone).

(Part 2 of 3) Cenél Eoghan will expand across northern Ireland with their cousins Cenél Conaill and the Northern Ui Neill between 500-800 BCE. The clans of Finn Valley have the same DNA as people from Gwened in Brittany. But how could this be? Recent discoveries from DNA testing are unlocking the migration patterns of Celtic tribes as late as 800 CE to 1200 CE. The Green story begins in pre-history Ireland then moves to Scotland as they form part of the Dalriada. Descendants of their tribe will then travel to Brittany, France during the Dark Ages.

My grandfather was Robert Rennie Green born on February 25, 1898 in Derry City, Londonderry County, Ireland. His father was Young Rennie Green born January 14, 1869 in Belfast No. 4, Ireland and his mother was Margaret Jane Patterson born December 1, 1874 in Belfast, Ireland. Young Rennie and older children immigrated to Canada in 1908 and his wife Margaret and younger children followed in 1910. Does anyone have connections to these Green family ancestors?

Areas of Origin for Grene

Write an email address and click 'Invite' to share this page with more members of the Grene tribe.

Discover where the Grene Family members live around the world

Show off the Grene Family Crest…