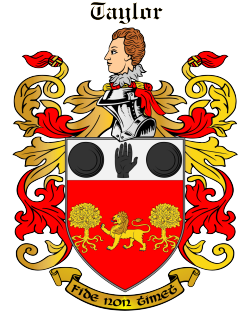 This is an English surname but of French origins. It derives from the word "tailleur" meaning "a cutter-out of cloth", the surname being adopted from the medieval job description after the 12th century. It is said that over the centuries its numbers have been swelled by its adoption as the English forms of various equivalent continental names such as Schneider, Szabo, and Portnov, which have entered into Britain mainly as refugee names.

In 1881, widespread population was 189,341, most predominantly in Lancashire and West Yorkshire with an estimated 16,000 population in each county. In Bristol there were approximately 4,000 residing there. Just to take one southern and one midland county, Kent had 5, 348 bearers and Nottinghamshire had 3, 204 in 1881.

A very early bearer in Kent was one Walter Taylur, recorded in Archaeologia Cantiana (Kent) in 1180. Another early recorded Taylor is William le Taillur, who was recorded in the Pipe Rolls (Somerset) in 1182

Today Taylor is the fourth most common surname in the British Isles with a population of 250,000.

Taylor was also adopted by other Europeans in Britain and the USA as anglicisations of Schneider, Szabo and Portnov. Isaac Taylor, in the 1881 Census for Leeds, was born in Poland and Jacob Taylor in the Census for Liverpool was born in Germany.

In Great Britain, Farming was the most popular of occupations, followed by Agricultural Labour, Labour and Coal Mining.

Most of the early forms of the surname are obsolete.  However, a Mr. Taylor, of Kent who had changed his name to Tayleure, once haughtily demanded of a farmer the name of his dog, the man replied, "Why, sir, his proper name is Jowler, but since he's a consequential kind of puppy, we calls him Jouleure!"

CITATION[CLOSE]
State Library of Queensland. (Retrieved 2016, October 27) Ann voyage to New South Wales, Australia in 1809 with 200 passengers. Retrieved from http://www.convictrecords.com.au/ships/ann/180HenryH On the other hand, Henry Taylor of Kent was a convict who was transported aboard the Ann to New South Wales in 1809.

The Latin motto on the arms, 'Fide non Timet', means 'Faith not Fear'.

Tell us about any famous Tailor (or surname variant) you think we should add here. We will get our genealogists to check them out and add them to the list. Thanks!

Join the conversation with the Tailor tribe

I have traced my ancertry through DNA to Isaac Taylor (Sr) born 1710 Antrim, Armaugh, Ulster, Ireland He married Isabell Wilson in 1730 in Ireland She was born before 1713 in County Armaugh, Ireland They 6 sons John b 1731; Andrew b 1733; Isaac Jr b 1734; William b 1736; George b 1738; and 2 daughters Lettice b 1732 and Elizabeth b1748. All children were born in Ireland EXCEPT Elizabeth who was born in Augusta County, VA, I researched but cannot verify Isaac's father as either William or Nathaniel (dont know if same person) Does anyone have any information or can lead me in the correct direcgtion?

Susan Taylor, William Nathaniel Taylor born c 1671 is my 7th GGF too. I was born in Carter County TN. Isaac Nathaniel Taylor born 1710 is my 6th GGF. Julia Alice Taylor Hart 1850-1930 is my great grandmother. Please contact me and we can discuss family connections. I've connected with several other Taylor relatives. I've researched the line all the way back to the 7th century to France.

Hi all, I had my DNA tested and it showed me to be 50% British/Irish 27% French/German 16% Broadly European. My dad is Jimmy Don Taylor his dad was Willie D Taylor I don’t know much more than that. I do know Willie had brothers and sisters.

Hello! So my dad just had his DNA tested and his results show he is 24% Irish, my dads mothers maiden name is Taylor, Willie Lee from Tennessee. Courious as to our anestery and our coloring of black to dark brown hair, brown eyes and olive colored skin that came from my grandmother Willie L. Taylor. Any insight ? The remaining DNA is of whales and northwestern Europe.

To Susan Taylor. After working with William Nathaniel Taylor more I think maybe his mother was Francis Walker 1640–1680 BIRTH 1640 • Accomack Co, VA DEATH 22 SEP 1680 • King and Queen Co, VA 7th great-grandmother She seems to turn up more in the hints. Hope this helps you.

Looking for the family of Thomas J Taylor and Margaret Lee Brakebill. They had a son William Franklin Taylor born in Springfield Missouri December 4, 1876. Have nothing past that except Margaret died shortly after William was born and October 16, 1912 William married Emma Lena Hale.

I am looking for the family of William Nathaniel Taylor (or Nathaniel Taylor) born in Autrim, Ireland in 1671. He is my 7th Great-Father. I am trying to find out who his parents were but have not had much success.

(Part 1 of 3) The Taylor name can be found in the British Isles, but one of its origins according to DNA is from the north-west coast of the Emerald Island. One Taylor story [dominated by DNA tribal marker R1b-L513, Subgroup A1] can trace their origins to the Finn Valley in Donegal, Ireland from 50 BCE. Perhaps the journey begins with the Clanna Dedad; Deda, son of Sen or Deda Mac Sin. This Taylor surname origin is from a Northern Ui Neill [R1b-L513] tribe. The Cenél Eoghan and the tribes of Donegal conquered much of Ulster (Derry and Tyrone).

(Part 2 of 3) Cenél Eoghan will expand across northern Ireland with their cousins Cenél Conaill and the Northern Ui Neill between 500-800 BCE. The clans of Finn Valley have the same DNA as people from Gwynedd in Brittany. But how could this be? Recent discoveries from DNA testing are unlocking the migration patterns of Celtic tribes as late as 800 CE to 1200 CE. The Taylor story begins in pre-history Ireland then moves to Scotland as they form part of the Dalriada. Descendants of their tribe will then travel to Brittany, France during the Dark Ages.

Looking for the family of Robert Patrick Taylor. He was born in 1868 in County Cavan Ireland. As far as I know his fathers name was James and his mothers name was Mary.

Areas of Origin for Tailor

Write an email address and click 'Invite' to share this page with more members of the Tailor tribe.

Discover where the Tailor Family members live around the world

Show off the Tailor Family Crest…