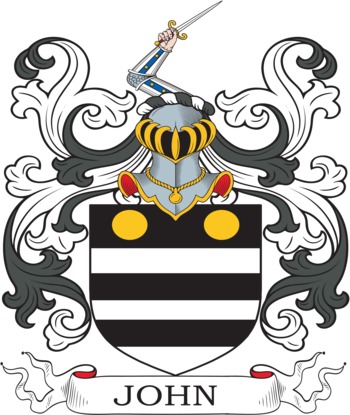 Design your own John Family Crest

John is a patronymic surname, and so refers back to an ancestor who had the personal name John. In this sense therefore it originally meant 'son of John'. In most cases, the surname eventually developed into Jones, Johns or Johnson, but many other families retained 'John' specifically as a surname, in particular in some parts of Wales. It is far less frequently seen as a surname in England where the Jones, Johnson, Jackson, and Johnston versions prevailed.

'John' as a name comes from the Hebrew Yohanan meaning 'graced by God'. Its popularity as a given name over the centuries in Britain probably stems from its Biblical associations.

In Wales, fixed surnames only gradually began to be adopted from the 16th century onwards. Some of the earliest forms of this surname would therefore be written as 'ap John', meaning son of John. Very early examples include Edward ap John who was archdeacon of Carmarthen in 1509, and Robert ap Edward John who lived in Bangor, Caernarvonshire in 1599. However, the majority of families who started to use John as a hereditary surname did so during the 18th century and the earliest years of the 19th century, when the original ancestor whose personal name was John would have lived.

As a fixed, hereditary surname in Wales, during the 19th century it was most often seen in parts of Pembrokeshire, Carmarthenshire and Glamorganshire, and only very rarely seen elsewhere in the country at that time.

Areas of Origin for John

Write an email address and click 'Invite' to share this page with more members of the John tribe.

Discover where the John Family members live around the world

Show off the John Family Crest…